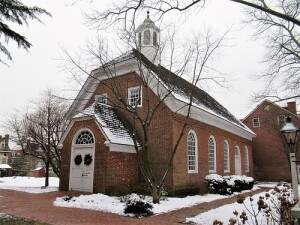 Elizabeth Gebhart "Betty" Carpenter, 89, of New Castle, DE passed away peacefully on Wednesday, September 8, 2021. Betts was born in Wilmington, DE the daughter of the late Chandler H. and Mary (Fagan) Gebhart. She was a graduate of William Penn High School Class of '49 and a graduate of Goldey Beacom College where she received her associate degree in business. Betty worked as a secretary all of her life. She began her career working at the Dupont Experimental Station until she married the love of her life Bill Carpenter.  After her sons were of school age, she began work for the State of Delaware, working for 5 years at the Delaware State Hospital, then transferring to the Colonial School District, working both at William Penn High School then in the Administration Building for 25 years before retiring. In the late 70's, she also worked part time at Legislative Hall for Rep. Robert T. Connor. She was a Life member of the New Castle Presbyterian Church, where she was active in the women's groups, served as a Deacon, as an Elder, as a member of Session and as Clerk of the Session for several years. She even worked part time in the church office when the need arose.

Betts was family oriented and was active with her sons as they were growing up. She was a member of the William Penn Band Boosters, served as Den Mother with the cub scouts, and traveled on many a school field trip. She loved going on cruises with her late husband Bill and taking family trips along the east coast. She loved to bowl in leagues with her late husband, and did so at both the Bowlerama and Pleasant Hill Lanes for many years.  She enjoyed her times with family and close friends, which was most important to Betty.

She is survived by her sons Bill Carpenter (Connie) and Mark Carpenter (Kris); 4 grandchildren: Bill, Brett, Katie and James; and a great granddaughter MacKenzie; as well as several loving nieces and nephews who she loved and they meant the world to her and many close friends.

To send flowers to the family or plant a tree in memory of Elizabeth Gebhart Carpenter, please visit our floral store.